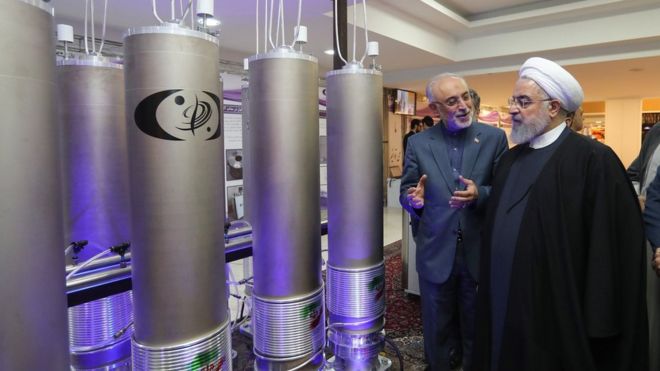 European powers have triggered a formal dispute mechanism over Iran’s breaches of key parts of the 2015 nuclear deal – a move that could spell its end.

Iran has gradually lifted all limits on its production of enriched uranium, which can be used to make reactor fuel but also nuclear weapons.

It has said it is entitled to do so in response to sanctions reinstated by the US when it abandoned the deal in 2018.

France, Germany and the UK said they did not accept Iran’s argument.

The mechanism, set out in article 36 of the deal, involves the dispute being referred to a Joint Commission that will have a minimum of 15 days to resolve the issue.

If the complainants are still not satisfied, they can refer the matter to the UN Security Council, which could vote to reimpose any sanctions lifted under the deal.

Iran has accused the Europeans of abusing the process.

“The usage of the dispute mechanism is legally baseless and a strategic mistake from a political standpoint,” said Foreign Minister Mohammad Javad Zarif.

But a foreign ministry spokesman said Iran was “ready to… make constructive attempts to maintain international agreements and would welcome any practical initiatives in this regard”.

Russia also criticised the Europeans’ move, saying the activation of the mechanism could make a return to implementation of the deal impossible.

What went wrong with the deal?

The deal saw Iran, which insists that its nuclear programme is exclusively for peaceful purposes, agree to limit its sensitive activities and allow in inspectors in return for the lifting of crippling economic sanctions.

President Donald Trump reinstated US sanctions to try to force Iran to negotiate a new agreement that would place indefinite curbs on its nuclear programme and also halt its development of ballistic missiles. Iran has so far refused.

The other parties to the deal – the three European powers plus China and Russia – have tried to keep it alive. But the sanctions have caused Iran’s oil exports to collapse and the value of its currency to plummet, and sent its inflation rate soaring.

Tensions between Iran and the West have also escalated as a result of a series of attacks in the Gulf region that the US has blamed on Iran and its proxies, as well as a US drone strike in Iraq this month that killed top Iranian general Qasem Soleimani.