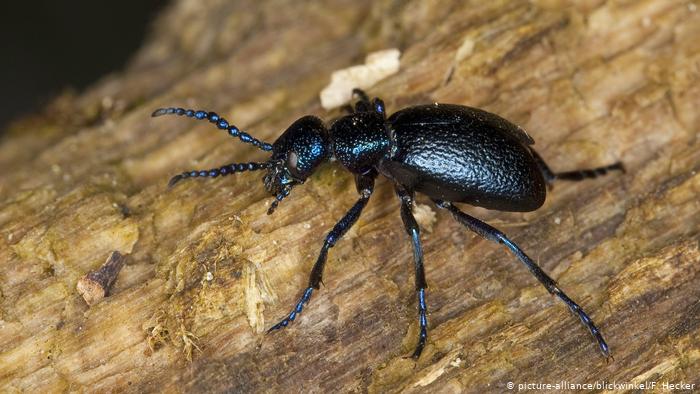 The bug, one of 30 types of oil beetles in Europe, has been named insect of the year for Austria, Germany and Switzerland. Known for its healing properties and deadly toxic secretions, it is also an endangered species.

Meloe proscarabaeus, a European blister beetle, has been named “Insect of the Year 2020” for Austria, Germany and Switzerland by the Senckenberg German Entomological Institute, which began proclaiming the award in 1999. The award was initiated by Holger Dathe, who was the institute’s director at the time.

Measuring between 10 and 35 millimeters in length (0.4-1.3 inches), the beetle has been part of human culture for some 4,000 years. Thomas Schmitt, the Scheckenberg Institute’s director and head of its selection committee, says the first reference of human use of its Cantharidin poison is likely an ancient Egyptian text from 1550 B.C: describing a bandage designed to induce contractions during childbirth.

Throughout history, Cantharidin, the odorless terpenoid the beetle secretes, has been prized as an aphrodisiac, a healing salve and a poison used by ancient Greeks for executions as well as by assassins in the modern era. The Cantharidin produced by one beetle is enough to kill an adult human.

In the course of its life the beetle uses the substance to protect larvae and pupae against predators. The name blister beetle comes from chemical burns that occur from exposure to the substance. Blister beetles are also commonly referred to as oil beetles, due to the fact that they release droplets of Cantharidin when threatened.

One unique aspect of the life cycle of the blister beetle is the fact that its larvae, which are laid underground, crawl onto flowers where pollinating bees transport them back to their hives. At that point, the larvae feed on bee eggs and pollen until they emerge from the hives between March and May.

The blister beetle is a prodigious procreator, with a single female being capable of laying between 3,000 and 9,500 eggs every one-to-two weeks as many as five or six times. Despite that, the insect has been placed on Germany’s red list of endangered species due to loss of habitat. Blister beetles are predominantly found in sandy, open spaces, mostly in proximity to heath landscapes, dry meadows and orchards.