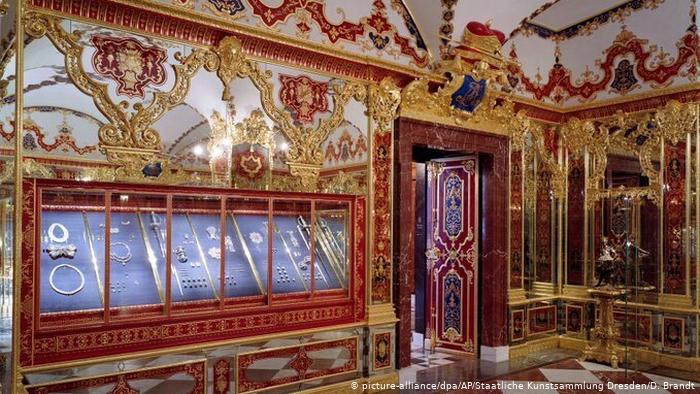 Detectives have said they will give €500,000 for clues that lead them to the culprits in one of Germany’s biggest heists. The financial appeal comes after thieves made off with priceless 18th-century jewelry sets.

German police offered a €500,000 ($550,000) reward on Thursday for information regarding the theft of priceless treasures from Dresden’s Grünes Gewölbe earlier this week.

The eastern German museum, known in English as the Green Vault, houses one of Europe’s largest treasure collections. Two thieves were seen on camera entering through a window, before escaping in a vehicle that was later found burnt-out.

Authorities said there may be more people involved in stealing the haul of 18th century jewelry and are offering a hefty reward for clues to find the perpetrators.

The president of Saxony police, Horst Kretzschmar, and prosecutor Klaus Roevekamp released a joint statement saying: “We will stop at nothing to solve this case. By offering a reward of half a million euros for clues that lead to catching the perpetrators who broke into the Green Vault in Dresden on Monday, the investigators … are taking a further important step in bringing back the stolen items and catching those responsible.”

The theft included at least three priceless 18th-century jewelry sets, according to General Director of Staatliche Kunstsammlungen Dresden Marion Ackermann. She said the material value was relatively low, but the worth from its historic and cultural value was impossible to measure.

The museum later confirmed the stolen objects were encrusted with hundreds of diamonds, including the famous 49-carat Dresden white.

“We are shocked by the brutality of the burglary,” Ackermann said shortly after Monday’s heist.